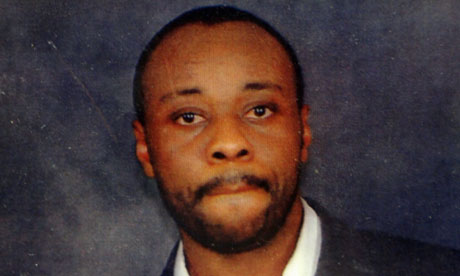 David Wood, the head of the Home Office's immigration enforcement, has given a qualified apology to the family of Jimmy Mubenga, the Angolan asylum seeker who an inquest jury last week ruled was unlawfully killed by three G4S escort guards.

Wood told the Commons home affairs select committee that the inquest jury had found that Mubenga's death while being forcibly restrained on board a plane at Heathrow airport in October 2010 had been the result of the guards failing to comply with their training.

"I am willing to apologise to the extent that it was our responsibility," said Wood, who was asked by Labour's David Winnick why he couldn't give "a simple apology" to Mubenga's family.

"I am not reluctant. I am happy to apologise to that extent," said Wood. "We did all we could.

"There are occasions when people who work directly or indirectly do not do what they are told or comply with their training. That was an awful and regrettable incident. I am not saying that we had no responsibility for that tragic incident. We have to learn lessons from it and make sure that it never happens again."

Wood stressed that "getting it right was important", as the Home Office immigration enforcement directorate carried out 5,500 escorted removals every year. He added that the operation had been undertaken by independent contractors for more than 20 years and had "generally been an enormously successful operation".

The Crown Prosecution Service is reconsidering its original decision not to bring criminal charges in the wake of the inquest jury's verdict.

Wood also confirmed that government plans to introduce a duty on private landlords to check on the immigration status of potential tenants, which are the subject of public consultation, will be modelled on the current duty on employers not to give jobs to illegal migrants.

He hinted strongly that the proposal may well be accompanied by a much wider issuing of residence permits to migrants. "We are bringing in residence permits more and more and that is something which might accelerate that process," he said.