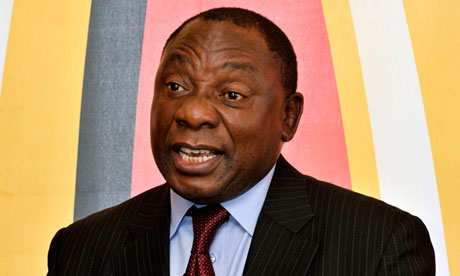 A series of emails from Cyril Ramaphosa shows his support for Lonmin's management against the 'criminal' striking workers. Photograph: Gallo Images/Getty Images

A hero of South Africa's struggle who is now a business tycoon has been accused of having the blood of Marikana mineworkers on his hands after the release of emails he sent to mine management and government ministries.

Cyril Ramaphosa, who 25 years ago led the National Union of Mineworkers in a key strike against the white minority regime, was criticised for betraying the very people he used to represent.

Soweto-born Ramaphosa, 59, co-authored the widely revered post-apartheid constitution and remains a patrician figure in the governing African National Congress – but his business interests include a seat on the board of Lonmin, the company that owns the platinum mine where, two months ago, a wildcat strike led to a police massacre of 34 workers.

On Tuesday, the official commission of inquiry into the Marikana tragedy was shown a stash of emails written by Ramaphosa, suggesting that he sought to intervene with senior government figures on Lonmin's behalf. On the eve of the killings, he called for action against miners engaged in "dastardly criminal" conduct.

His apparent switch of sides is being described as a parable of how South Africa's liberators became seduced by crony capitalism. "It's a personal tragedy," said Adam Habib, a professor of political science at Johannesburg University. "This is the general secretary of the NUM 25 years ago and architect of the South African constitution. It's a symbolic example of the degeneration of a cadre and civil activist and how he has become entrapped by his newfound wealth. It resonates so powerfully because It's typical of many in the ANC."

Workers at the Lonmin mine went on strike on 10 August. Within four days, 10 people had been killed, including two policemen and two security guards, prompting Ramaphosa to email Albert Jamieson, Lonmin's chief commercial officer. "The terrible events that have unfolded cannot be described as a labour dispute," he wrote. "They are plainly dastardly criminal and must be characterised as such … There needs to be concomitant action to address this situation."

Releasing the email to the commission, advocate Dali Mpofu, who is representing injured mineworkers and more than 200 who were arrested, said: "This was on 15 August at 2.58pm, exactly 24 hours before the people were mowed down on that mountain. We have emails that were being exchanged between Lonmin management, government ministers [of mineral resources and the police] and at the centre is a gentleman called Cyril Ramaphosa."

Mpofu said Ramaphosa had called for action to deal with the "criminals", whose crime was to seek a wage increase.

"It is clear Ramaphosa was directly involved by advising what was to be done to address these 'dastardly criminal actions', which he says must be characterised as such and dealt with effectively." The emails showed a direct "toxic collusion" between Ramaphosa, Lonmin, mineral resources minister Susan Shabangu's department, the police ministry and state security agencies, he added, describing the shootings as "premeditated murder of defenceless people".

Ramaphosa warned the police minister, Nathi Mthethwa, to come down hard on the strikers, and was lobbied by Lonmin management to "influence" Shabangu and advised her that "silence and inaction" on the events was "bad for her and government", it was claimed.

An email from Ramaphosa with the subject heading "Security Situation" reads: "You are absolutely correct in insisting that the minister [Shabangu] and indeed all government officials need to understand that we are essentially dealing with a criminal act. I have said as much to the minister of safety and security."

In another email, Ramaphosa highlights his "interaction with some of the roleplayers", including a proposed conversation with the ANC secretary general, Gwede Mantashe, to suggest that the party intervene. There was also a proposed meeting with Shabangu in Cape Town to discuss "what she needs to do".

Two days after the shooting, Ramaphosa's Shanduka company announced he had donated R2m (£142,315) towards the funeral costs of the miners. He wrote in South Africa's Sunday Times: "There are few innocents in this tragic saga … For wherever we find ourselves, we cannot escape the sense that, through our action or inaction, we bear some responsibility for the circumstances that made such a tragedy possible. As we mourn, so too must we introspect."

Ramaphosa has been touted as a possible deputy to President Jacob Zuma in an ANC leadership election in December. Earlier this year he chaired a party disciplinary appeals committee that upheld the expulsion of ANC youth league president Julius Malema.

Siphiwo Gqala, a miner in Marikana who survived the massacre, said on Wednesday: "I'm so angry with Cyril Ramaphosa. Now there are rumours of him going for deputy president. They will be voting for someone [in December] who sent an email saying they must do something about us."

The ANC youth league called for Ramaphosa to apologise to the families of the injured and dead. "As a seasoned unionist, the ANC Youth League expected more from comrade Ramaphosa," spokeswoman Khusela Sangoni-Khawe said.

"The criminal acts he spoke of were the legitimate calls of workers demanding a decent wage. We concur with the assertions made by the legal representative of the workers: Marikana was a premeditated murder of our people and comrade Cyril has the blood of Marikana workers on his hands."

She added: "He has clearly decided to nail his flag to the mast of capital. He has sold out the people."

Rehad Desai, spokesman for the Marikana Support Campaign, said: "The journey of Cyril Ramaphosa from a talented, assiduous, brave trade union leader to a crony capitalist is a tremendous arc. It's highly disappointing for our campaign supporters who held him in high esteem over the years. We should call on the ANC to seriously consider his membership if they want to retain the respect of thinking South Africans."

Ramaphosa, who last month apologised on national radio for extravagantly bidding R18m (£1.28m) for a buffalo and its calf, declined to comment on the emails. Lonmin stated: "Lonmin's action to engage with appropriate authorities of the state was simply part of a process aimed at achieving normality."When a graphic video of the 34 strikers being shot dead by police was played at the commission on Tuesday, many grieving widows, wearing black mourning headscarves, erupted in tears. Others covered their faces in horror and one woman collapsed and was carried out of the hall.