The Equality and Human Rights Commission is being destroyed

The Equality and Human Rights Commission is being destroyed

Victims of inequality and discrimination need an empowered institution, not the hollowed-out shell coalition cuts would leave 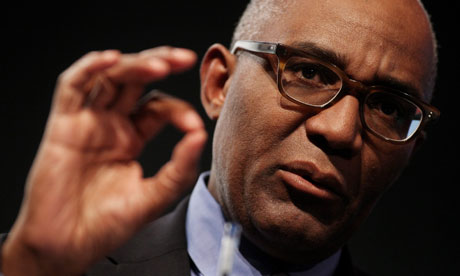 'When Trevor Phillips retires as chairman next month the new management will be all white.' Photograph: Oli Scarff/Getty Images

Both coalition parties went that extra mile to woo various equalities lobbies before the general election, yet Conservatives and Liberal Democrats are now conspiring to dramatically downsize the institution responsible for upholding equalities laws.

Take race equality. Writing on this site David Cameron promised to change black Britain with "concerted action to overcome the racial barriers that exist in Britain today", while the Lib Dems published a race mini-manifesto pledging to "end race discrimination in employment".

Nick Clegg, in a lecture to mark 30 years since the Scarman report was published, said: "Real equality is not just the absence of prejudice, it is the existence of fairness."

Two years on, disproportionate black, Asian and minority ethnic (BAME) unemployment has risen significantly while unequal outcomes remain as high as ever across health and the criminal justice system.

Now the coalition plans to slash the Equality and Human Rights Commission (EHRC) to within an inch of its life.

The commission is meant to uphold equality laws covering gender, disabilities, age, sexual orientation and race. It has the power to launch investigations into public services suspected of discriminating and publish "non-discrimination notices" enforceable by the courts.

To many this institution might seem remote, and its work invisible. Yet while we cannot see how it improves our day-to-day lives, if you look closer there is a great deal of valuable work going on across the various equalities "strands" to improve protection against unfair workplace practices.

It has also defied the UK government on issues such as the Abu Qatada deportation, promoted voting rights for prisoners and taken chancellor George Osborne to task for failing to run the rule over his budget which penalised already disadvantaged groups including women.

In May the Liberal Democrat Home Office minister Lynne Featherstone announced she was chopping the EHRC's budget in half, to £26m. More recently it emerged that the commission had prepared an even smaller annual budget of £18m. That's just a quarter of the original £70m it started life with under Labour in 2007.

These savage cuts will leave the commission with just 150 staff, fewer than the old Commission for Racial Equality and the Disability Rights Commission had before they were merged into the EHRC.

I am alarmed at reports that the vast majority of staff facing redundancy are from BAME backgrounds. When Trevor Phillips retires as chairman next month, the new management will be all white. Hardly an example to Britain's public institutions.

As a Lib Dem councillor I am deeply ashamed that my party is fronting up these cuts.

To make matters worse, Featherstone is also planning a bonfire of the commission's investigation powers as well as burning the "duties" on public authorities to monitor equalities and promote good relations.

All in the name of reducing the "burden" of red tape. So if ensuring public services are delivered fairly is a burden, what does that say about the coalition's attitude to equalities in general?

The plan to scrap the "socio-economic duty" – requiring authorities to assess whether policies might adversely affect the poor – is particularly alarming in our class-ridden nation, with its entrenched underclass and one of the poorest records for social mobility in the western world.

A combination of biting budget cuts and the stripping away of many of its powers threatens to turn the commission into little more than a glorified equalities thinktank. A sort of PR agency for equality, unable carry out its core functions let alone truly get to grips with tackling institutional discrimination or mount landmark test cases in the courts.

Even the United Nations is concerned about what's going on, threatening to remove the commission's "A-status" as a national human rights institution believing it could become too small to qualify.

The effect of these coalition cuts is to take away the commission's enforcement stick, leaving it with a solitary carrot of gentle persuasion. If only tackling inequality was so simple.

The softly-softly approach is merely an early opportunity for public authorities to get it right from the beginning, not an end in itself. It is like abolishing the police and replacing them with billboard ads encouraging everyone to be law-abiding. How do you apprehend those who break the law regardless?

That's why these cuts matter. It's about the political will of this government to make Britain a more equal country.

The EHRC is not perfect. It has its faults. Its first three budgets were rejected by the National Audit Office and Phillips's controversial reappointment by the then Labour minister Harriet Harman set off an internal fight.

In fairness, this dysfunctionality was resolved at least two years ago with new financial controls and changes to the organisation's structure, so ministers who refer back to these old problems are scraping the barrel of excuses to slash the commission.

Former trade union leader Baroness Margaret Prosser, who takes over from Phillips, is currently facing a rebellion from staff, many of whom face the axe.

It feels like the body is well on its way to being abolished by stealth. If it survives it will be a hollowed-out pale shadow of itself.

Far from special-pleading to protect a self-serving "equalities industry", the arguments in favour of protecting the EHRC are very simple. The sheer scale and entrenched nature of inequality and discrimination in Britain mean that victims – and potential victims – need an empowered and properly resourced institution to be their protector and defender.

As the coalition also plans to charge people fees for taking out employment tribunal cases, isn't it better to prevent discrimination occurring in the first place?

Cameron and Clegg talk about fairness yet striving to eliminate inequality is a hallmark of a fair society. Vandalising the EHRC will surely make us a less fair country.