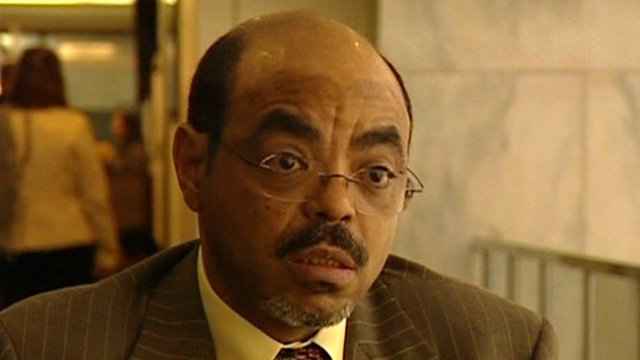 Meles Zenawi was interviewed by the BBC in 2008

A spokesman said Mr Meles had died in a hospital abroad - but did not specify where or give details of his ailment.

Speculation about his health mounted when he missed an African Union summit in Addis Ababa last month.

Mr Meles took power as the leader of rebels that ousted communist leader Mengistu Haile Mariam in 1991 and led the country's economic transformation.

Meles Zenawi's death will have repercussions far beyond his country.

He was undeniably central to everything in Ethiopia - the good and the bad, the economic growth and development, as well as the repressive climate denounced by opposition politicians and journalists.

But he also played a key role in the region.

Since Mr Meles took power in 1991, Ethiopia has seen Eritrea secede, then fought a war with the new country. It also twice sent troops into Somalia to fight militants linked to al-Qaeda.

Ethiopia also has peacekeepers in Abyei, the border region claimed by both Sudan and South Sudan.

Political leaders in all these countries will be carrying out rapid calculations about what Mr Meles' death means for them.

The West has also lost a key ally in the Horn of Africa.

Now the attention will switch to whether Mr Meles built a strong enough system to outlast him.

He was austere and hardworking, with a discipline forged from years spent in the guerrilla movement - and almost never smiled, says Elizabeth Blunt, the BBC's former correspondent in Addis Ababa.

Liberian President Ellen Johnson Sirleaf said Mr Meles was an "intellectual leader for the continent", and the UK Prime Minister David Camerson called him "an inspirational spokesman for Africa" who had lifted millions out of poverty.

But a spokesman for al-Shabab Islamist militants in Somalia - where Mr Meles twice sent troops to fight - told Reuters news agency they were "very glad" of his death, saying Ethiopia was "sure to collapse".

"The premier [had] been receiving medical treatment abroad for the past two months and his health was improving, but due to a sudden infection which occurred [on Sunday], he went back to hospital for emergency treatment, and even if a lot of medical attention was given by his doctors, he died yesterday [Monday] at around 23:40," the statement said.

Mr Meles had not been seen in public for some eight weeks prior to his death, and was reported to have been admitted to hospital in July.

Some reports suggested Mr Meles was in hospital in Belgium, suffering from a stomach complaint. Other reports said he was in Germany.

A period of mourning had been declared until the funeral, government spokesman Bereket Simon told reporters. No timing has been announced.

Mr Bereket said the prime minister had struggled with illness for a year, but he had continued to work regardless.

Mr Bereket insisted Ethiopia was stable and "everything will continue as charted" by the late prime minister.

This theme was echoed by state television, which stated that "even if Ethiopia has been badly affected for missing its great leader, Prime Minister Meles Zenawi initiated fundamental policies and strategies which will be further strengthened". 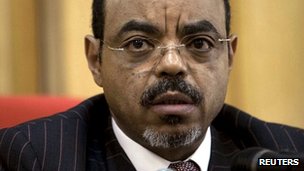 Three weeks ago, spokesman Mr Bereket dismissed reports Mr Meles was critically ill, and declined to give any details about Mr Meles' whereabouts.

Ethiopia's economy has grown rapidly in recent years, despite the secession of Eritrea and the subsequent war between the two countries.

Under Mr Meles, Ethiopia became a staunch US ally, receiving hundreds of millions of dollars in aid over the years, and hosting the US military drones that patrol East Africa.

He won accolades from the West for sending troops to battle Islamist militants in Somalia, says the BBC's James Copnall.

But concern had been growing about the lack of democracy and human rights in Ethiopia, our correspondent in the region says.

At least 200 people died in the violence that followed the 2005 elections, and many journalists and politicians have been locked up.

"He was always talking about democracy, civil rights, adherence to [the] constitution and the like. But it was only a lip service," he told the BBC.