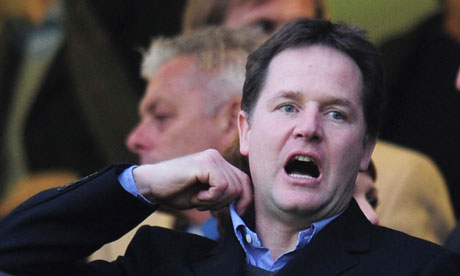 The reputation of Britain's banks will take a fresh battering when the deputy prime minister accuses them of discriminating against members of ethnic minorities in the way they distribute loans and set interest rates.

Nick Clegg will challenge them to show they are meeting their responsibility to black people and will set up an inquiry into their practices, and what is holding budding black entrepreneurs back.

Andrew Stunell, the local government minister, and Lynne Featherstone, the equalities minister, are to bring together the banks, the Equality and Human Rights Commission, and the government's ethnic minorities advisory committee.

Delivering the Scarman memorial lecture, Clegg will argue banks are holding black people back from breaking "the last frontier" of racial economic equality.

He will say: "Britain's banks, bailed out by the British people, have just as much responsibility as everyone else, arguably more responsibility, to help Britain build a strong and dynamic economy. Unleashing black and ethnic minority talent is their duty too."

His remarks are likely to provoke a terse reaction from the banks, who feel they are under constant attack from the coalition over the way in which they support industry.

"We know that 35% of individuals from black African origin say they want to start a business, but only 6% actually do. Are they having problems accessing the loans they need?" he said.

"Past evidence shows that firms owned by individuals of black African origin have been four times more likely than so-called 'white firms' to be denied loans outright. And that Bangladeshi, Pakistani, black Caribbean and black African owned businesses have been subject to higher interest rates than white and Indian owned enterprises."

The inquiry "will look at the barriers preventing black and ethnic minority groups from accessing loans".

Clegg will say: "Why is it that members of some of our ethnic communities want to start their own businesses, but their success doesn't match their ambitions?"

He had heard anecdotally time and again that ethnic minorities found it more difficult to secure loans.

In his speech he will admit a range of factors may be holding black people from succeeding in business. He will point to "a mix of poorer education among ethnic minority groups, perhaps a lack of the right guidance, a lack of their own capital to invest. There may be an element of self-exclusion too.

"But if we are serious about turning the UK into an island of entrepreneurs, we need to get to the bottom of this. What are the barriers to finance? Are our banks doing enough?"

Clegg will extend his criticisms to sport, saying despite great progress in the promotion of black players in English Premier League football, it is remarkable how few black football managers or chief executives there are. "If you are a white player you have a one in 50 chance of moving into management. If you are a black player? One in 500."

He will say progress has been made on political equality since the Scarman report in the 1980s, but will say the parallel war on economic equality has barely even begun, asserting economic opportunity is "the next frontier for race equality".

He will claim: "Real equality is not just the absence of prejudice. It is the existence of fairness and opportunity too."

He will praise Labour's record on legal changes and reforms inside the public sector, but argue the approach though benign was too narrow since it tried to deliver equality solely through the state.

"In the public sector men from ethnic minorities working full time now earn slightly more than their white male colleagues, but in the private sector, for every pound a white man earns, a man from an ethnic minority earns just 89 pence.

He will claim: The state has been used to hide the sins of the market – and the veil is now being lifted."